I don't have the time to listen to all of this stuff myself to filter out the good from the bad, aside from those Desperat tracks which I already posted, so head over to Mosher to check out a round-up of new Swedish punk/hardcore tunes: http://www.mosher.se/musik/nytt-fran-desperat-diskonto-vicious-irene-och-mycket-mer/

Stream a couple brand new tracks from Swedish råpunks Desperat off their upcoming split 12" with Deathraid.

Fresh mangel from Desperat off their upcoming 7" "Början på slutet", due out late May/early June via . Also on the way, a split 12" with Deathraid and the band's much-anticipated full-length debut LP which will be out this fall.

Mob 47 and Desperat will be heading to London to play Scum Fest on May 26.

Desperat will be joining Mob 47 on their upcoming Japanese tour in October, which of course makes perfect sense as they share multiple members: http://desperathardcore.wordpress.com/2011/09/02/4-sma-ratter-japan-tour-2011/

New music from Desperat, posted in honor of May Day. Direct link: http://youtu.be/um31R4RkHKs

will be doing a 3x7" box featuring splits between Anatomi-71 + Bombstrike, Desperat + Giftgasattack and Makabert Fynd + Tortyr. 200 hand-numbered copies only (with "bonus stuff" included) plus 300 standalone copies for those folks that don't want the whole package. 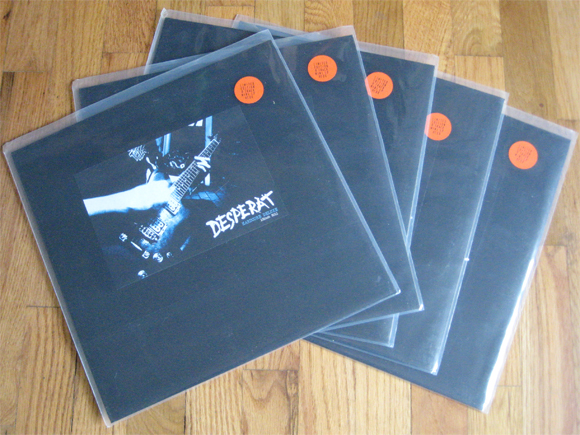 I've given up on doing mailorder at this point (and will probably be doing a clearance at some point soon), but I did recently do a coop buy of Desperat's excellent "Hardcore deluxe" 12" and have a single unclaimed copy left. You want it, it's yours for $32ppd in the US. Or you can wait to buy it on eBay for significantly more, if that's your choice. No doubt this one's gonna be a future bonzer, especially with an already (nearly?) sold-out run of a mere 300 copies. As for those of who wondering why you should care, Desperat is a new Swedish hardcore band with members from Mob 47 playing classic Swedish d-beat punk, just like the title of the song proclaims: "Guaranteed mangle". No need to reinvent the wheel here, just proof that old dudes often rage way harder than their younger counterparts. 'Nuff said.

will be putting out a new six-song 7" from Swedish råpunks Desperat, preview here: http://denihilrecords.blogspot.com/2011/03/desperat-denihil-release.html

A lesson in hardcore

A lesson in hardcore, courtesy of Desperat. The band just recorded a new record this past weekend and you can read all about it at their website: http://desperathardcore.wordpress.com/ (assuming you can read Swedish)

Swedish hardcore punks Desperat are back in the studio and have already posted one new track online for preview: http://dbeatrawpunk.blogspot.com/2011/03/dis-vad-ar-det-for-krangel.html