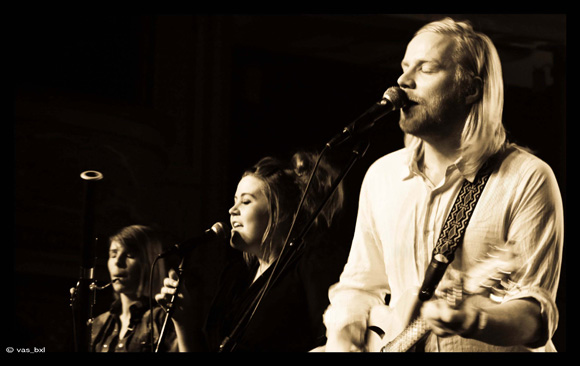 Hjaltalín is one of the most promising new Icelandic bands that combine pop melodies, male/female vocals and an eclectic instrumentation. Their unusually large lineup consists of - apart from the regular guitar, bass & drums  a piano, accordion, bassoon, clarinet, cello and a violin. Their debut album "Sleepdrunk seasons" was released to great acclaim in Iceland in December 2007 and was produced by Benni Hemm Hemm and Gunni Tynes of Múm. They are currently touring Europe. It's a Trap! caught up with them in the Netherlands and Belgium and had a chat with drummer Axel Haraldsson and violinist Viktor Orri Arnason.

You were formed in 2006, and it was originally intended to be just one show. What's the story behind?

AH: There was this songwriting competition in our high school and we just got together, wrote the song and we were just going to compete in the competition, but then it just started rolling and then we kept on playing.

Did you eventually win the competition?

AH: No, we came second. A lot of people were really surprised that we actually won only the second place.

What is exactly on the cover of your album? How did you choose it?

AH: Originally it's a flower painting by a famous Icelandic painter, but it's been messed up. We took it and some guy made the circles.

VOA: We couldn't use the original one.

How come you got invited to support Cold War Kids? Did the band choose you?

AH: They needed some band to finish up their European tour. Our booking agent contacted them. They had already some other bands to choose from; they liked us and they chose us.

Was it fun playing with them?

AH: It was great!

Which place did you enjoy playing the most so far?

AH: Our release concert in Iceland. That was a great show!

How do you go about writing a song, especially with all these instruments?

AH: Most of the time Högni, our singer, comes up with the basic idea of a song and then we start jamming and people get their own thing into it and then it evolves into a complete song. Generally our singer writes most of the stuff.

Does he write the lyrics as well?

AH: No, a lot of our friends are doing the lyrics for us.

Are you classically trained?

What do you usually listen to at home?

AH: No one in the band listens to the same stuff. I listen to all kinds of stuff.

VOA: I listen to a lot of classical music now; I was a lot more into rock and pop before.

AH: Me, rock and hip-hop and everything.

How do you feel about the emerging Icelandic scene and what do you think sets the Icelandic music scene apart from the rest of Scandinavia?

AH: The most famous of course are Björk, Sigur Rós and Múm and all this strange music.

AH: If you see Iceland from the outside there is this strange music element going on. Of course there is everything on the Icelandic market, but the things that break out of Iceland are mostly some indie bands.

Any Icelandic artists you respect and admire?

VOA: Of course Sigur Rós and Björk. We used to listen to some guys called Ensimi.

AH: We are into the underground rock scene because we were in a punk band before Hjaltalín.

How did the economic crisis impact your life?

AH: It's much more expensive to tour Europe because the currency is so low in Iceland. I think it hasn't hit us yet.

VOA: It's mainly that we have to pay much more for everything now, but it doesn't affect us mentally.

AH: Maybe it will, I don't know. A lot of people are losing their jobs.

You are currently working on a second album. Is there going to be a different approach from "Sleepdrunk seasons"?

AH: We are discussing these things a lot right now. When we come home from this tour, we are going to record the first two songs that are going to be on the record and then we are going to write more stuff and see what happens.

VOA: I think we are going to stick of course to the elements of the instruments but of course there are going to be some changes of sound, maybe even darker because the last one was so bright. The new songs are a little bit darker.

When is it going to be released?

AH: We are talking about September this year. That's the goal right now.

Words and picture by Vasilis Panagiotopoulos