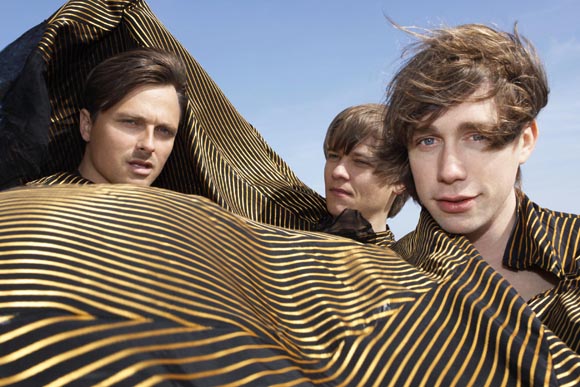 Journalist Sophy Grimshaw recently interviewed Mew singer Jonas Bjerre about the band's new album "No more stories...". Jonas discussed the band's change of direction, the impact of bassist Johan Wohlert's departure, how he writes lyrics and passing out on stage.

Sophy Grimshaw tells IAT: "I interviewed Jonas for a magazine article, while he was at a friend's studio making clay-mation graphics to show on stage. There was much of the raw transcript that I didn't use in my article, but that I thought some fans might be interested to read online, unedited. It's great to have access to a blog like IAT where Scandi music geeks like myself can get into more detail... I even had a go at getting Jonas to tell me what the song title "156" means, the great Mew mystery. He declined of course, but sweetly."

Bo (Madsen, guitarist) said he sees this new album as a more colourful, and varied record. Is that how you feel also?

Yeah definitely. I think it's a more playful record, too. "Kites" (previous album "And the glass handed kites") was very experimental for us as well, but there was something about "Kites" where it was very dark and gloomy and cold sounding. That was what we wanted to do at the time, but I think it was a little bit, not depressing, but kind of a tough record to make. It was more enjoyable making this one because it had more colour and it was more uplifting as a whole.

It even goes a little bit tropical in places, not bad for some Danes...

Was there any literal travel that had inspired you?

No, it was more a question of escapsim, the image of a beach. There were no beaches where we recorded in Manhattan. It was more like a getaway in our imagination, a paradise. We've never been to Hawaii and we have a song called Hawaii. It's a dream of some place you have yet to go.

Bo was also discussing the fact that the lyrics are less dense and dreamlike than on previous Mew albums, and easier to understand?

Yeah. I was thinking a lot about my way of writing. Most of the time when we come up with a new piece and I come up with the melody in the practice space I often just sing whatever comes to and I write it down and it's like a stream of consciousness thing. Then sometimes I'll sit and deliberate over a lyric for months and it'll be really hard for me to finish it. I would it's say 50/50; those are the two methods I'm using.

But I wanted this time to have at least passages in each song that really make sense and have a direct meaning and narrative. Just because you shouldn't always hide behind beautiful imagery. Sometimes you just need to really say something directly.

You mention Silas and Bo by name in one new song, which probably surprised a lot of Mew fans.

Right, I think they [Silas and Bo] were kind of surprised too. I think I was just thinking about the band and thinking about the future. It was the idea of experiencing nostalgia sometime in the future when we get older and thinking back to this time when we're actually out there doing it, doing what we dreamed of doing when we were kids. It's happening right now.

Sometimes you don't really appreciate the time you have now because you keep thinking, I gotta get this stuff done for that deadline. You keep thinking about the future deadlines. You forget to look around and think, "this is amazing." We're travelling the world, we're playing to thousands of people. It's a wonderful gift to have. I'm probably going to look back on it a lot when I get older. I'm probably going to glamorize it a lot when I get older, how much fun it was.

What has been the impact on Mew of Johan (Wohlert, founding bassist) leaving the band?

In many ways Johan was the most mature person in the band. He was often the voice of reason when we had discussions about things. I think because he was missing all of a sudden, we've had to grow up and be more reasonable as people. Especially me and Bo. We used to have these discussions for hours and hours about minor details in the music. Johan would say "look guys, it's probably not going to make much of a difference anyway." We'd say "yeah, you're probably right," and find some kind of a compromise and we've had to do that ourselves now, me and Bo, so we had to grow up.

It's very psychological. It's not only that you're missing an instrument in the writing session or on tour. It's a lot more than that. It's a human thing. It had a huge impact when he left and in the lyrics on this album there's a lot of hints at that.

Would he ever rejoin?

I think he left the band partly because of having his kid and that he couldn't really see himself travelling as much, and partly I think it was just he wanted to move in a different direction musically. He was just in a different place of mind creatively and he's really happy with what he's doing now and it's probably a good thing that he got to do his own stuff.

You have to hit some very high notes again and again on tour. How do you protect your voice and keep up your stamina?

I take care of myself, get enough sleep, I eat healthy food and I don't drink too much. As long as I do those things I usually don't have problems. What can be a problem is if I get sick. That can be a huge pressure. It forms a kind of neurosis in any singer. You just know that if you get sick it's going to be so much harder to do what you do. I've gone on stage sometimes with a really high fever and I actually passed out on stage one time. The show just has to go on. And I've had shows where I was really sick, but it was still a great show.

What words do you tend to use to describe Mew's sound?

I used to tell people it was quite emotional, but now I am afraid people will think of the whole 'emo' genre, which we don't really fit into. So I don't know. I think we're quite adventurous about sound and music and we experiment. Um, I don't know. What would you call our sound?

Um. Experimental rock? Even though that doesn't always sound right.

Ha. Although that has its place, of course.

Of course! I think that we combine pop music with something that's much more experimental, in our own way. I don't think I would even try and describe it. It's difficult.

Would you have to kill me if you told me?

Yeah, exactly. It's our little mystery. I might put it in my will so that it can be made public when we die. But if you found out what it means, it's not actually that exciting, I think people would be disappointed. I think you'd be disappointed if you knew. It wouldn't open a gateway to another world. (Laughs)

OK, so it's not a code I can punch in to open something?

But in a nice way it is the code for something -- because it's the code I type in to listen to the track.

That's good enough for me.