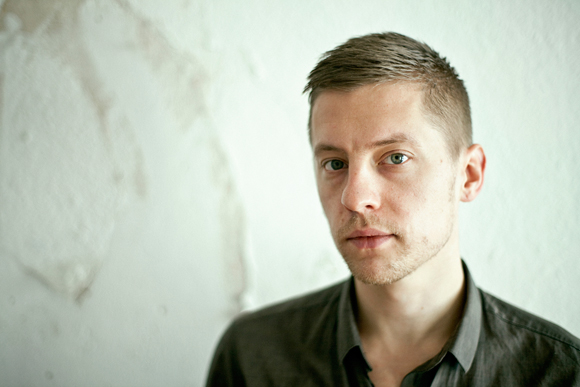 Rasmus Kellerman has a new band, but he won't tell us what it's called, or who else is in it.

If you've wanted more of the arrestingly heart-felt acoustic music that Kellerman began to explore with the album "The 24th", you won't be getting it (or at least, not right now). The album that Kellerman released under his own name was marked by a stripped-down honesty carried by his clear voice and lone guitar, with lyrics more autobiographical than his project Tiger Lou. It's brave when a musician takes on the "I" persona, and maybe, if you're blessed (or cursed) with the humbleness of a Swede, it might be a bit difficult for you to sell.

About a year ago there came a slightly dark time in Kellerman's blog that seemed to reflect his struggle with the sheer difficulty of standing alone on a stage without a band to share in the creative jam. Performing alone, no matter how honest the music and emotion, seemed vastly different from the joy that Kellerman expressed in past interviews about the musical collaboration that occurred onstage with Tiger Lou. But in the moment when an artist is in creative turmoil, soul-searching and changing, the most interesting music often occurs; as if feeling lost is the best place to begin something new.

If you're a follower of Kellerman's blog, you'll know that plenty of music is going on right now in Kellerman's life -- but it's all behind the closed doors of the studio. Kellerman has lately formed the first band in which he is collaborating on the actual musical creation itself (unlike Tiger Lou, in which the collaboration happened after album production and during performance), and while he has been hesitant to talk much about the band before the music hits the world, it seems to mark a new musical perspective and direction for him.

The way he speaks of it is of an ensemble effort, very much a meeting of minds and talents, and he digs waiting for the music that emerges from it. Rasmus is making us wait for more details too, but he's taken the time to tease us about it. It's a Trap interviewed him this past week.

I would like to learn more about your new project! I understand from your blog that you're not yet ready to talk about it beyond "It's with two friends and it really inspires me," but to me it means a break from how you seemed to write about music in your blog a few years ago.

I guess you're right about that! The difference this time around is that I'm in an actual band, with actual people. It's not just me, a guitar and a computer, writing music, and figuring stuff out as I move along. For now, the info is sparse, partly because there's not much to tell, and partly because we really want the music to be the first thing people encounter. There's is an idea to it, and we're not being elusive for the sake of being elusive. I like sharing the writing and recording process, and loved writing about my recordings etc., but those projects were so different from this one.

I seem to recall a post from the end of 2010 that seemed incredibly glum about your creative process and music in general. In the humble view of a stranger, it seemed that you put a lot on the line to sing your autobiographical songs, and maybe felt a bit disappointed by the results. 2011 was a year in which you picked up from that, and then in October of 2011 you were signed to and things seemed to kick back into gear...

Every time I've finished a record or a tour, I feel like it was my last one. Not because I don't love making records or touring with my friends, but because I think I can never write a new album, or possibly make another tour break even. And also because I'm very dependent on things being progressive.

When I wrote my acoustic album, I had no intention of making it a "proper" release. I was living in Berlin, Tiger Lou were on indefinite hiatus, I had an office and was doing graphic design full time, walking the dog and enjoying the slow road. Then I sent some stuff to , and the A&R Fredrik Holmgren was so stoked about it, which in turn rubbed off on me. So I figured I'd give it another go, but with a very different approach than usual. I wanted to keep everything very simple.

I booked two weeks in Rolf Klinth's studio (where I always record) and called my friend Thomas Hedlund, asking him to play drums on some of the tracks. We never rehearsed beforehand, it was just me, Thomas and Rolf, trying the song out a couple of times, and then punching the record-button. After that we brought in some more people for a few overdubs, but essentially, no editing was done, everything is live and very much on the spur of the moment.

All the vocals were recorded during the same night (due to me having the flu for ten fucking days straight, and no voice to sing with). All the songs are very personal, some were several years old, some brand new. My main goal was to do everything differently, and I'm very happy with the outcome. In regards to everything else, I guess most people just weren't as stoked about the outcome as I was. That's life for you.

So where does this leave you musically now? At some point in your blog you wrote about wanting to make stuff that wasn't like anything you'd done before (in Araki or Tiger Lou or under your own name).

As for now, I'm working full time at a huge ad company, so finding the time and energy to make music is sometimes difficult. However, I'm fortunate enough to be able to take time off sporadically, and lock myself into a studio someplace, trying to make something beautiful again. That is what the new band is about.

So what's it like?! What do you have to say about your music right now?

Shit, I dunno. It's always weird. When I was younger writing was so easy. These days, sometimes it feels like a chore. But in a good way obviously. It just takes a true effort is what I mean, and I'm good with that. Once a new song is finished, that feeling is one of the best ones there is.

And now, with being in band, it's even better in the end. Because now, there are other people involved, who've added and subtracted from the equation, making the music so much bigger that what it originally was. That's why I try to do a lot of collaborations and remixes these days, there are elements in there, much bigger than me. A very big world, waiting for me to explore it.

So you mention how exciting it is to work with other people in a band, rather than having all of the reins yourself. What have you gained? And do you feel like you've lost anything (like, obviously, total control), and is it a worthy trade?

I don't really see it as a trade, as I still have the ability to do another Tiger Lou album anytime I choose to. When I need to hide away, write every single note of music, play every instrument, produce it myself, I'll do so. For now I'm really happy doing something new, and sharing the experience. The best being that the sum of the group is greater than the sum of its parts.

I could ask about musicians and if we're familiar with them from other musical projects, but I'll wait to be happily surprised. Instead, what I'm most itchingly curious about is what this music sounds like. Any hint at all? "Sounds like a sunny day in Berlin" ?

The soundscape is very much 80s oriented, mainly using vintage analog synthesizers like Jupiter 8, CS-80 and Mirage. One of the guys is a techno/house producer so his influence on all things rhythmic is very noticeable. And I guess I have a personal style of writing songs, melodies and words, so that shines through as well. The third person is a melodic genius and whenever his fingers touch the keys, magic happens. The sound is very big, very emotional and very danceable.

This all sounds extremely exciting, can't wait to hear it!