Another one I pulled from the stacks recently, shame that Repoman couldn't hold it together for more than an EP. Nowadays there's a whole slew of folks doing noisy nihilistic hardcore again, but that wasn't the case 5 years ago when this EP was released, nor are a lot of the modern-day purveyors as good. Strange how many of the current crop of Mysterious Guy HC clones are more concerned with being weird or provocative when they really should be concentrating on writing actual songs. Anyhow, enough old-man-clouding, just enjoy the track.

Over the almost-10 years or so I've been doing this site there's been a small handful of bands that have really stuck with me and sound just as good today as when I first heard them. The evocative rustic folk of Det Gamla Landet is a prime example. Where are they now?

Carolina Wallin Pérez' album of Kent covers was pretty damn good, but her single "Sanningen" shows she's no slouch when it comes to her own self-penned material. Look for her new album "Där vi en gång var" to be released on April 25 via .

Not that I really need an excuse to post a track from the very-excellent Vånna Inget, but considering that today is International Woman's Day (and Purim, but let's not get distracted), I'll take it. Sweden has long excelled in the realm of female-fronted melodic punk with early acts such as Tant Strul, Mögel and Pink Champagne leading the way and modern bands like Knugen Faller and Masshysteri carrying the torch. Vånna Inget keep it burning. Go see them next week at our It's a Trap! Clubnight at Debaser Malmö!

Can't deny that I count various members of Culkin as my personal friends, but that doesn't mean I don't sincerely believe they are a good band. Wait, scratch that: great band! I know I'm predisposed to enjoy guitar-based indierock -- that much is obvious -- but that also doesn't mean that Culkin automatically qualify on that front either because there's a shit-ton of bands with dudes playing guitars who are straight-up garbage. Along with Tennis Bafra and a few others, Culkin herald the arrival of what I hope to be a new age of Swedish indierawk, with one foot in the past (see song titles such as "Tim Kerosene" and if you don't get it, do your homework) and eyes toward the future. The vital ingredients: strong hooks, a muscular rhythm section and dense melodies. Culkin has it all, along with triumphant guitar solos as a bonus.
"Glow" is the slow-burn epic opener of the band's new album "Several Sundays" and I hope they don't get mad at me for sharing it with you, but I'm doing it anyway. Act first, apologize later y'know. Buy the CD here or listen at Spotify.

I told you about the upcoming Diskoteket LP the other day, now I bring you a sample tune. Forget about the mediocre new Thåström album, this is the brooding Swedish darkness you desire. Echoes of Commando M Pigg, Tant Strul and other exemplary postpunk of the past, but with its own sense of urgency and vitality. "Mörka tankar" is only one of two songs I've been privileged to hear so far, but it went straight to the top of my wantlist.

Here we have the best example of Scandinavian Americana since, well... since the last time CS Nielsen put out a record. No contest really; where so many others try and fail, Nielsen makes the endeavor sound so completely effortless, as if it's exactly what he was born to do. Frankly, I doubt most American artists can complete either as I can't remember the last time I heard a new country album this good that wasn't from a legacy artist. Not that I have time to keep up with such things, but I openly defy anyone to prove me wrong. Listen to the entire new album "Man of the fall" via Spotify and be prepared to chalk up the first solid entry on your best of 2012 list.

My wife and I went to see the movie "Pina" this past weekend in Seattle and I was surprised to catch a piece of music I recognized, but couldn't place. Stuck around for the credits and was pleasantly surprised to find it was the excellent Finnish instrumental act Magyar Posse, a band I enjoy quite a bit but rarely find myself listening to with any regularity. It's always good to be reminded, especially when you can be pleasantly surprised to discover the sounds have aged better than anticipated. A glut of early aughts postrock made this seem less special at the time (2002), but how much of that stuff really stands the test of time? Magyar Posse does. And it makes perfect sense to use their music as a soundtrack to modern dance.

New music from Swedish expat/New Orleans resident/one-woman-band Theresa Andersson off her upcoming album "Street parade", due out March 14 in Sweden/April 24 elsewhere (I think?). Seems like she's going for a bit of a bittersweet 60s girl-group vibe on this one, though not necessarily in the fuzzy, lofi way made popular by Vivian Girls et al. A bit more swing, a lot more horns, and, as always with Ms. Andersson, a clever amalgamation of novel percussion elements that make up the song's base. Hit up her website for another tune featuring Peter Morén of Peter Bjorn and John: http://theresaandersson.com/

I always make an effort to check out the various Manifest Awards nominees because, inevitably, there's always at least a few quality names that have previously escaped my attention. I don't worry so much about who actually won or who was unfairly passed over, I just want new music. As for the punk category: I'm already a fan of Vånna Inget and happily grabbed a copy of their excellent LP via 1-2-3-4 Go! Records; Obnoxious Youth's stiff thrashy hardcore is not my thing at all, but kudos to them for winning; and I must confess, I don't know Black Feet at all, but that will be remedied eventually. Which leaves Sju Svåra År, a band that I've been aware of for awhile, but never fully investigated until very recently. Shame on me, because they are ruling female-fronted melodic punk, not too dissimilar from the aforementioned Vånna Inget or other acts like Masshysteri and The Vicious. So yeah, right up my alley -- especially when they combine exquisite vocal harmonies with raw grit like on tracks such as "Pappa". I may have neglected to track down a copy of their LP before now, but that will soon be remedied.

MP3: Franky Lee - A man without a heart

Some of Franky Lee's bio material attempts to peg them as an indierock throwback, but there's no comparison to bands such as Tennis Bafra or Culkin. No, Franky Lee is a straight-up turn-of-the-millennium style arena-sized alternative rock act ala Foo Fighters or Jimmy Eat World. Which is by no means a bad thing! The band I'm currently playing with kind of attempts to cop that sound too, for what it's worth, though we probably throw in a few more new-wavey influences. Anyhow, I really do like this sort of stuff despite it being patently uncool in many social circles. It's definitely not punk to aspire to such pop grandeur -- a funny thing to note when you consider Franky Lee's member pedigree (likewise, in my own band's case). I guess there's a freedom in getting old in that those sort of petty things don't seem to matter as much anymore. I'm feeling it, signed: an unapologetic fan of pop convention. Go see Franky Lee when they play Debaser Malmö next week at It's a Trap!'s clubnight.

Franky Lee - A man without a heart

I fully admit it now: my first impression of Ghost was way off and totally wrong. I went in with false expectations due to whatever hype and backlash was going around at the time and totally missed the fact that they are simply a great heavy rock band with tons of solid hooks. I'm sure a lot of folks are bummed by the occult vibe and costumes, but that stuff doesn't bother me at all. In fact, I am unreservedly excited about seeing them play in Seattle tonight and look forward to seeing an actual show. See you there? 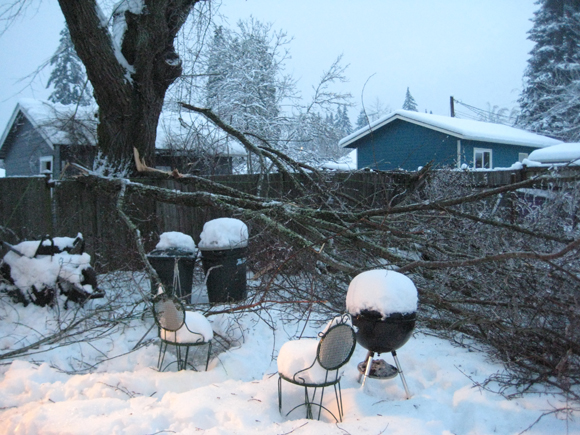 I have no idea how widely it's been reported, but Western Washington underwent some seriously extreme weather this past week, so between working my regular dayjob among itinerant power outages and making sure my family and pets are taken care of, keeping up this site doesn't exactly register on the priority list. So despite the carnage above which shows you the view from my home office window, we are all doing okay, more or less. The fence and the tree, not so much. I'll get back on top of things soon enough.

Apparently it now takes me a full week to dig out of the hole I got myself into by taking time off in December. So while it might not feel quite so timely anymore, I'm going to try and take the time to highlight a few of my top 10 mentions over the next little while before getting back into the Sisyphean task of keeping up with what's new. First: Dödsvarg. The band initially spurred my curiosity because they/he is ex-Detektivbyrån, but when you combine that with the descriptor "a mixture of Meshuggah and Skitsystem," I knew I absolutely needed to hear it. The album "Livet är en dödsorsak" doesn't disappoint either -- the music is crusty, mathy and totally pissed, but they missed one very important note of reference: besides Skitsystem and Meshuggah, Dödsvarg also reminds me a lot of "It's me god"-era Breach. This is not just a good thing, it's a great thing. Don't let Dödsvarg stay overlooked and underappreciated!

King Diamond - No presents for Christmas