Besides the music, you can sum up this years festivity in Roskilde in two words. Mud. And rain. The movie quote "dry land is not a myth!" is not at all overrated when speaking of how it was at the festival and camping area. Reminiscing back to 1997, the year that everyone talks about as "the one with all the rain and mud", this year's festival really had its moments weather-wise but it rained as much as it did in one week 1997 in just one day (Thursday, first day of the festival) this year, simply making it impossible to go anywhere without a pair of proper rubber boots. It poured down 0,9843 in (25 mm) on that day. It was hell to be exact.

Fortunate for me, I had rubber boots and managed to get around up until the last day when a throat infection and blisters from my newly bought boots brutally stopped me. Apart from that, I got around seeing lots of bands (not counting the Scandinavian acts reviewed here), drinking beer and meeting lots of friends and, hey, that's festival life for you. Due to the bad weather, Roskilde wasn't really the party I expected, but it was never dull. Roskilde never is. And I will definitely be back next year, you can count on that!

Some of the bands I saw: The Arcade Fire, Mastodon, Brian Jonestown Massacre, The National, Beastie Boys, Camera Obscura, Roky Erickson & The Explosives, Strike Anywhere, among others.

Unfortunately Cold War Kids had to cancel because their tour bus had broken down. It's a pity.

Death By Kite
It was with low expectations I went to see these Danes and luckily for me, I was wrong. Death By Kite really invited the crowd to a show with their indiepop as main attraction. And with a bang. Seeing as their recently released self-titled album (by the nice blokes at Quartermain Records) is somewhat of a hit in Denmark, they gathered quite an audience. Björn Lange and his partners delivered Placebo-esque rock with a touch of Sonic Youth and, hey, I'm not complaining. It's just that it's not too original, y'know. And a lot of the material is a bit similar. Other than that, it was an excellent show where the three members were well in tune with each other and when "Bhf. Asta" rang out, the roaring from the crowd nearly lifted the tent roof at the Pavilion Junior-stage.

Decorate. Decorate.
The fact that this band formed in 2006 does not at all affect the tight feeling they have developed. Playing arty rock in the vein of Interpol seems to be the new black in Denmark and these guys are good at it. That doesn't mean it's good. In fact, it's really dull at times. Doing their best to get the crowds attention from the beginning by playing the semi-hit "Karen" did more harm than good. The tunes that followed that one, which indeed is a great song, sounded like bleak carbon copies. Thumbs up for the artistic intentions. However, it was one big yawn, to be honest. 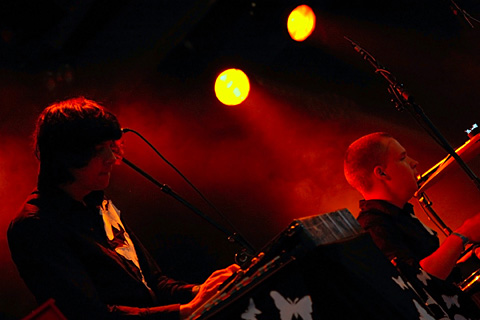 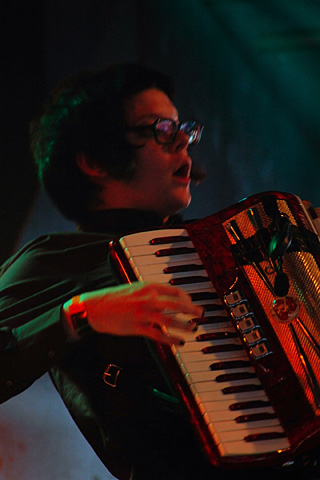 Detektivbyrån
Classic Swedish folk music mixed with dreamy psychedelic pop music - is that appreciated today? That's what I was wondering before I went to see Detektivbyrån, the charming trio from Värmland. And apparently, yes - approximately 2000 people went as well and saw a humble, playful band get lost in melodies and rhythms not far from Pluxus at times. But the huge difference between the two acts is that Detektivbyrån uses almost all acoustic instruments exclusively and that their tunes are so much better orchestrated. With just an EP out ("Hemvägen"), one brand new single called "Lyckans undulat" and a 7" split with Hemstad, this instrumental band has nothing to lose and a whole lot to win. And, I might add, when playing the single track it struck me that drummer Jon Ekström must have a metal background or something like that. I could tell from the first stroke. The tunes with a more waltz feeling, where the concertina takes a main role, kind of get me to think of Philemon Arthur & the Dung, but, of course, performed in a widely different way. Since PA&tD are long time favorites, I love the fact that these guys acknowledge them once again. Being Swedish, I, and a lot of people in the audience, could enjoy their banters when they apologized for their bad English and expressed sincere love for the people that went to see them. Definitely a nice afternoon gig. The only minus is that it can be hard to stay focused for that long listening to instrumental music.

In Flames
This death metal platoon is, by now, scene veterans and a worldwide name. Something that announcer Per Sinding-Larsen stated at the Orange Stage before the gig. Since the audience consisted exclusively of metal heads, that information seemed a bit unnecessary, but you know - a background like that calls for a band that can live up to it. As In Flames entered the stage, expectations rose and the sound knocked them down again. The first couple of songs suffered from the worst sound ever. Not only was it low, Anders Fridén's cordless microphone was not top notch. We did, however, get to hear "Leeches" third and by then, it was the band I expected to get to see. Being a group that started the well known Gothenburg metal-scene along with acts like At the Gates and Dark Tranquility, In Flames has taken quite a step from that scene and created a mix of neo-metal and heavy death metal. Something that, according to the puritans of metal, is off limits. in a way, I can agree. It just doesn't get me started. The rest of the crowd however, loved it unconditionally. Especially songs like "Trigger" from "Reroute to remain" where the singalong was deafening. Still, the experience was a bit disappointing. 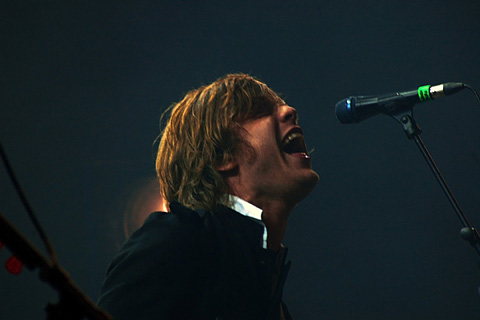 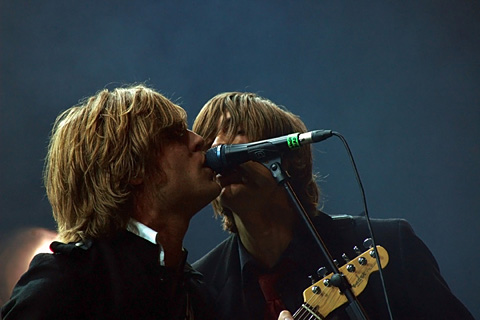 Mando Diao
The first time I saw this Borlänge band they had just released the EP "Motown blood" and they were fresh, cocky youngsters. They're still cocky, but definitely not newcomers anymore. With three full-length records out they can sort out the hits and give the crowd what they want, namely rock. The horn section was a really great addition to the gig's intensity wherein the band often rely on the changing vocal harmonies of lead singers Björn Dixgård and Gustaf Norén. It added an extra dimension to the bands ecstatic performance. And when the two singers sang "Long before rock n' roll" in John & Paul-style; no one could really doubt this band's qualities. The fact that they, the day after this gig, was invited to play at the Live Earth-marathon around the globe is proof enough. On the downside, I'd appreciate some variations in their songs. But if you're just going to see one rock n' roll gig this year, it should be one where Mando Diao is headlining. 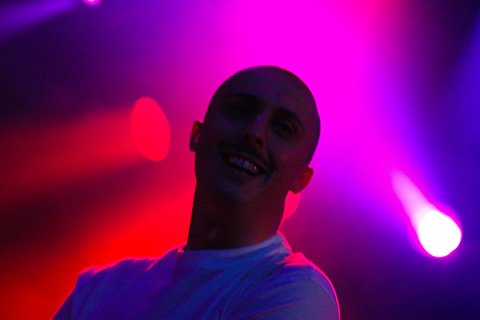 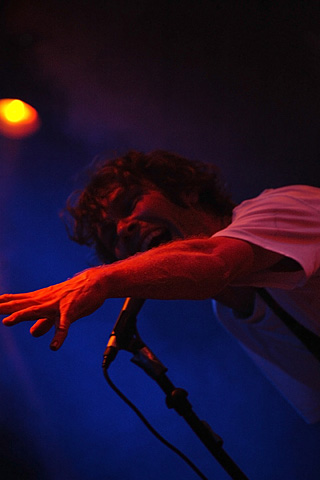 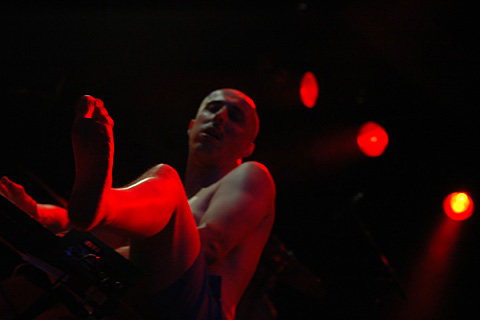 Quit Your Dayjob
Uncompromising, sadistic, humorous and mad. Hell yeah! QYDJ, one of Sweden's most insane bands, delivered a show at 3am like there was no tomorrow. One hour before the gig, people stood chanting the lyrics to "Look! A dollar". With songs that are rarely longer that 1:30 and a mixed-up surf/punk/electro sound, the band has found a winning concept. And it showed at Roskilde this year. Keyboardist Marcass tried his best to instigate the crowd (I made a bet with photographer Martin that he would strip off his clothes between the two first songs. I lost. But he did it later on as I had foreseen.) and singer and guitarist Jonass tried to beat his guitar to pieces while spitting the one-line lyrics into the microphone. And the people gathered at the Pavilion Stage loved it. And so did I, despite the fact that this was my 5th Quit Your Dayjob gig. The furious versions of "Pissing on a panda" and "Wasted" were masterpieces and the new material, taken from a forthcoming album due to be released this fall, sounded great. Speaking of new material, rumor has it that a female vocalist from one of Sweden's top pop/rock bands right now is doing guest vocals on one of the songs. I thought she would turn up for this gig but no, I was wrong again. Either way, I pity those who didn't take the opportunity to go see QYDJ at this year's Roskilde. 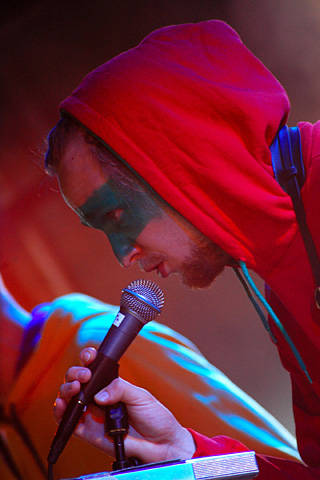 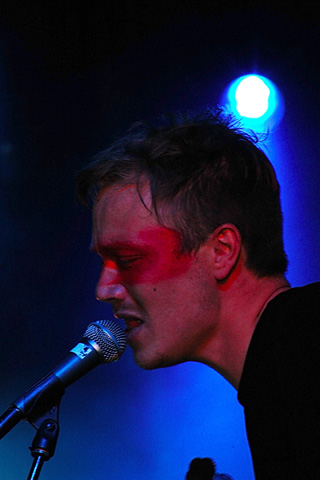 Slaraffenland
This quintet had the unpleasant task of performing at 12pm. in front of hungover festival visitors, but considering that their music can be categorized as free-jazz/indiepop with some postrock-vibes, they (and the crowd) did a terrific job. The atmospheric sounds they created was indeed a wake-up call and they demanded attention. With saxophone, trombone, oboe and a fantastic playful drummer accompanied by driven guitars, it's not hard at all to guess that this is a Rumraket-band, the label run by Danish act Efterklang. Considering their Swedish and Danish membership, you would have guessed that they would be quite well-known in Scandinavia, but apparently they've earned themselves an acclaimed name abroad instead. A pity really. 'Cause this band was appreciated at Roskilde and I'm sure they would be in the rest of the Nordic countries as well. It was epic and breathtaking at times. Especially in my favorite song, the last in the set, "Watch out" where the poppy side of the band breaks through and creates an atmosphere of well-being. And I'm not sure that that's what the band strived for when they wrote the tune, but that's the feeling that comes to me. And it's a good one. Over all.